Dude, What’s Up With These Freakin’ Stairs? 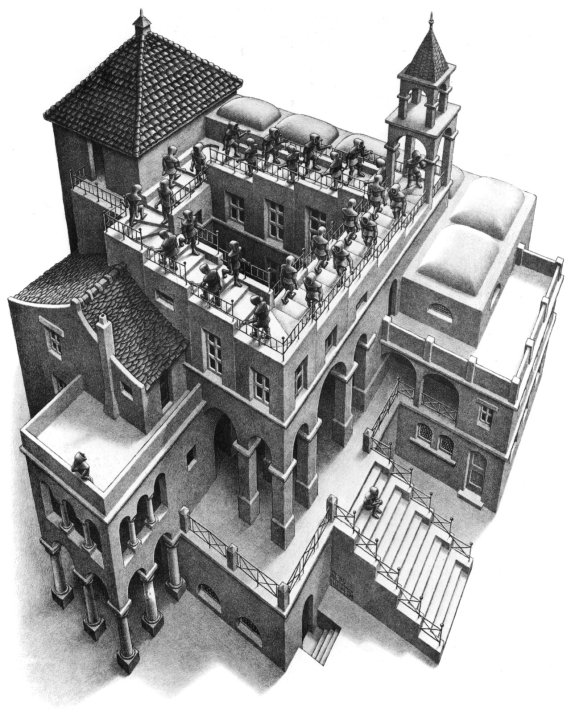 “Look, uh, has it occurred to you that we’ve been climbing these stairs for a heck of a long time?”

“I’m mean we’ve been walking up stairs all day and we’re not getting any where.”

“Oh course we’re getting somewhere.  We’ll be at the corner in a minute.”

“And then we’ll go around the corner.”

“And keep going up the stairs?”

“But we’re not getting anywhere.”

“Don’t be silly.  Every step takes us higher.”

“We’ve been ascending all damn day.  We should be on the freakin’ moon by now.”

“And here’s another thing.  Those guys going down the stairs?  They’re the same guys.”

“The same guys as whom?”

“What do you mean by the same guys?”

“It’s not polite to point.”

“Well, did you see him?  The guy with the schnozz?”

“Come on, he’s got a nose like a gherkin.  You couldn’t have missed him.”

“I’ll admit, that brother did have a… distinctive face.”

“That’s ridiculous.  He’ll be two stories below us then.”

“I’m telling you, he keeps showing up.  That schnozz is like the freakin’ north star and it’s starting to creep me out.”

“Where are we even going, huh?  Can you answer me that?”

“I am amazed you would even ask that question.”

“We are going upstairs.  I would think that would be obvious even to you.”

“Calm down.  People are staring.”

“Maybe they’re staring because we keep seeing the same guys coming down the stairs!”

“You’re embarrassing me.  How I got stuck behind you is beyond me.”

“Maybe you can ask for a new partner--if we ever get anywhere!”

“Hmm.  He does look familiar.”

“Well… maybe he took the elevator.”

“Elevator?  Are you insane?  Do you see an elevator in this freakin’ building?  We’re medieval monks, for goodness sake–you shouldn’t even know what an elevator is!”

“I just think that we should explore all possible options.”

“To heck with this… I’m getting off at the next landing.  I’m gonna go sit down for a while.”

“I’m sure it’s important.  We wouldn’t be walking this long for something meaningless.”

“That’s it.  I’m out of here.  Give my regards to schnozzilla when he comes around again.”

I am the author of "Catskinner's Book", a science fiction novel available on Amazon Kindle. http://www.amazon.com/dp/B008MPNBNS
View all posts by MishaBurnett →
This entry was posted in Artists That I Admire and tagged fantasy, fiction, M C Escher. Bookmark the permalink.

4 Responses to Dude, What’s Up With These Freakin’ Stairs?