Okay, back to work. 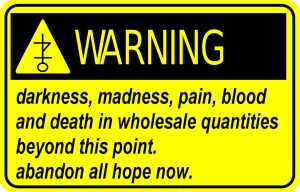 You have been warned.

For the last month or so I have been concentrating on promotion, which is a good thing.

I’ve generated some interest, picked up some new fans, got some visibility on Amazon.

During the five days that Catskinner’s book was available for free just shy of 600 people downloaded it.

Granted, many of the people who did so won’t read it.  When I first got my Kindle I went into a “free frenzy” and downloaded a couple of hundred books because they were free.  Most of them, I never read, and many of them I never will.   These days I try to be more judicious, but there are still times when something looks good and I’ll snag it and then decide that I really am not all that interested.

But, you know, e-books are forever, and I try to remember when I am looking for something to read to check what I already have first.  Sometimes I’ll check out something that I got a year ago and discover that I had a real gem hiding on my Kindle.

All of which is to say that I don’t expect that 600 people are reading Catskinner’s Book right now.  Some will read it later.  Some won’t ever read it.  Some will read the first page and decide that it’s not what they want.  Some are going to read it and love it and tell all their friends about it.  Some are going to read it and hate it, and they’ll tell all their friends, too.

I can’t control what people do with my work.  All I can do is get it to as many people as possible.  At this time in my career, with my current fan base, I think I’ve done that.  More people have been exposed to the world of James and Catskinner and Godiva than were before I started.  We’re going to put that in the Win column.

However, the downside of working to create a market is that then you have to supply that market, or else people will get all disgusted with you and call you bad names.

Which means that I have to buckle down and really start working on Cannibal Hearts. Because I have been kind of promising people that it’s going to be out this summer, and I have my office windows open now.  Summer is about to drop into my lap on both feet.

I have been stuck for a while on this book.  I know what to do next, and I know where the story is going, but I just haven’t wanted to do it.  It’s not squeamishness that stops me–it’s laziness.  Writing is work, and I dunwanna!

Cry me a river, right?  Time to cowboy up and get it down.  So I am going to be easing off on the promotion stuff and try to keep my fingers on the keyboard writing stuff that people will pay to read.   That doesn’t mean I won’t blog at all–I do love to noodle out my little posts here–it just means that I am going to take off my salesman hat (with no small amount of relief–it doesn’t really fit me) and put on my writing hat.

Now… where did I leave that giant squid?

I am the author of "Catskinner's Book", a science fiction novel available on Amazon Kindle. http://www.amazon.com/dp/B008MPNBNS
View all posts by MishaBurnett →
This entry was posted in Cannibal Hearts, On Promotion, On Writing and tagged Book Of Lost Doors, Cannibal Hearts., promotion, work in progress, writing. Bookmark the permalink.

6 Responses to Okay, back to work.