Beyond Kings And Princesses 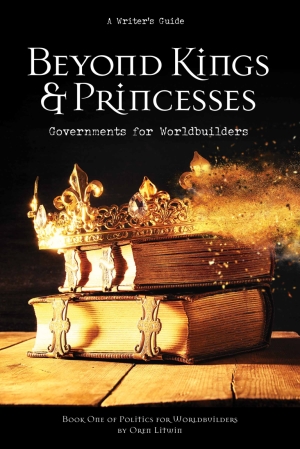 Having admitted that connection between us, let me go on to say that I think this is very handy reference work for writers of speculative fiction and I highly recommend it.

What Oren does in this book is break down the different parts of governments and how they work and interact with each other, with an eye to incorporating speculative elements into historical governments.

He challenges worldbuilders to consider the implications of magic and advanced technology on the mechanism of government. Suppose, for example, that a king didn’t just claim to be a demigod, but actually had superhuman abilities–how would that effect the balance of power between the Palace and the Nobility?

And while the book is written specifically for writers of fiction, it would be very useful for gamers creating their own campaign worlds.

Oren uses clear, easy to understand language and historical examples while avoiding proselytizing about this or that political system. The goal of this book is not to write “political fiction” in the sense that it is generally used, but to help writers set up conflicts within a fictional world to drive exciting stories.

I received an early draft of this book for beta reading, and it influenced how I set up the political structure of Dracoheim, making me consider how the Lord Mayor and the Parliament balanced each other in a Palace/Forum polity. Now that the book is complete, I’ve gotten an advanced review copy, for the purposes of this review.

I am the author of "Catskinner's Book", a science fiction novel available on Amazon Kindle. http://www.amazon.com/dp/B008MPNBNS
View all posts by MishaBurnett →
This entry was posted in Bad Dreams & Broken Hearts, On Promotion, On Publishing, On Writing, Uncategorized and tagged creativity, critique, fiction, promotion, publishing, realism, reviews, writing. Bookmark the permalink.

1 Response to Beyond Kings And Princesses