A Few Words With Venger Satanis 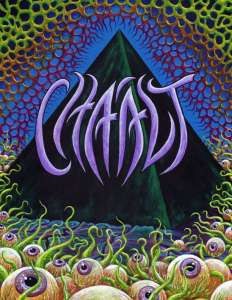 Venger Satanis is a Tabletop Role Playing Game Designer and a prolific blogger on the subject of RPGs. He publishes his work through on the DriveThruRPG platform as Kort’thalis Publishing.

His work falls under the general descriptor of OSR or Old School Renaissance–the RPG equivalent of PulpRev. He has an irreverent, often scandalous style and his game materials are full of sleazy sex, graphic violence, weird linkages, and blatant pop culture references. There is the same kind of satiric (and satyric) energy in his work as in Harry Harrison’s Star Smashers Of The Galaxy Rangers  or Norman Spinrad’s Iron Dream.  I don’t think he’d object to me calling him New Wave.

I consider myself a fan of his work, although I’ve never actually read any of his adventures. (I have read Old School Renaissance Like A F#cking Boss, and I recommend it not just for gamers but also for short fiction authors.) My experience with his work is all as a player in games run by The Mixed GM.

I first played in a module called The Liberation Of The Demon Slayer. You can read the GM’s description of that game session here. (Spoiler: We all died. But then we made up new characters and tried again.)

After we eventually liberated the eponymous Demon Slayer (it’s a magic sword and we “liberated” it in the sense of “found it and kept it”) we went on the explore the extraordinary world of Cha’alt, a kind of post-apocalyptic savage wasteland setting. Since Venger Satanis is about to release a new book in the Cha’alt setting, I thought it would be a good time to do an interview with him.

Venger Satanis: I write specifically for the GM and how he will engage the players. So, all at once, I’m writing for multiple readers – and think of all the different kinds of GMs there are! Even if the GM alone reads the adventure, that GM will have to deal with player actions and questions. I have to put myself in the mental space of everyone at the table. Ultimately, though, the adventure needs to be good, fun, scary, entertaining, or whatever you’re going for. That’s my job as the adventure writer – I’m providing as many tools and as much guidance as I can to help everyone at the table have an amazing session.

MB: Recently you posted on your blog a brief series describing your process in RPG adventure design. I found it interesting that when you laid out the rooms you included one that was just atmosphere, with no encounters either good or bad. Do you think that pacing an adventure by including such spaces is important?

VS: Yes, I do. Early on, there should be space (both physical and temporal) for the players and their characters to adjust to their present circumstances. It’s the idea of starting an adventure with entering the mythic underworld or it could be a dank dungeon or wizard’s tower. Once you’ve crossed this line, all bets are off. We’re not in Kansas, anymore. Empty rooms containing stuff to look at, lore to discover, things to pick up and fiddle about with, those are great additions to any adventure. It also gives the PCs an area where they can think and talk, not be forced into an immediate interaction from one room to another and another.

MB: Your work has a real Drive-In Movie/Direct To Cable aesthetic. Some people say that Fantasy as a genre is about recapturing the magic of childhood, but I’ve always been drawn more to the magic of adolescence and young adulthood. Would you say the same is true of yourself?

VS: I’d say there a gray area between childhood and adolescence. That time period between 1981 and 1987 was the most influential to me, and I consider to be the best regarding fantasy and sci-fi. Those years put me between 7 and 13. Since a lot of my work is also infused with a certain amount of exploitation, grindhouse, sleaze, and the drive-in / direct to cable aesthetic you mentioned, there’s definitely a return-to-adolescence kind of escapism that I go for.

MB: Your Crimson Dragon Slayer system has the simplest set of rules I have ever seen, in direct contrast to the massive rules cyclopedias of the big name games. Do you think that fewer and simpler rules makes for a better gaming experience?

VS: I do. “Less is more” has never been truer than when it comes to RPG manuals. Roleplaying, at its best, is cooperative imagination using rules as guidelines, interpreting worlds as the adventure unfolds I like to include just enough to cover the basics, leaving the rest up to the GM and, to a lesser degree, the players. Too many rules, too much system gets in the way. Pretty soon, it becomes less a roleplaying game and more like stereo instructions to codify and confuse those who just want to pretend to be elves and sorcerers and barbarians in a fairy-tale world!

MB: Your world of Cha’alt mixes Science Fiction and Fantasy elements. Have you gotten any negative feedback on that from genre purists who think that they should be kept separate?

VS: I’ve heard a few gamers say that’s a reason for them not to pick up Cha’alt, but so many D&D type worlds do mix fantasy and sci-fi, that most gamers expect it, nowadays. But the real caveat is the super-gonzo aspect of Cha’alt. About half the gamers I’ve talked to either like zero or low-gonzo campaign settings / adventures. Full-tilt gonzo is more of a niche area. There’s less audience, but of course that particular audience is under-served because of its niche appeal. So, Cha’alt’s triple helping of bat-shit crazy funhouse weirdness is complete fan-service for gonzo lovers.

MB: In most “grimdark” settings the world is described as being very bleak—everything is black, except for a few things that are dark gray or occasionally a sickly green. In contrast, Cha’alt is full of vivid, brilliant color—chartreuse and fuchsia and vermilion. Is this just as a reaction to the stereotypical “black tower of black stones with black mortar and little black windows with black curtains” or do the colors you use have some deeper symbolic meaning?

VS: My color choices are both a reaction to established norms and Venger living his best life via eccentric hues. I’ve always loved deep, rich, vibrant, and unorthodox colors! It’s been a not so subtle theme running through my RPG writing. Some colors have symbolic meaning, I do try picking colors with care… just like I would with paint on a canvas.

MB: I have not actually read Cha’alt—I have simply experienced the environment as a player. Tell me why I should buy my GM a copy of Cha’alt: Fuchsia Malaise. What sort of material do you include in it—new places to go, new things to kill, new stuff to acquire? Do you have any material for new player characters classes or races or abilities? What’s in the thing that you can tell me without spoilers?

VS: Cha’alt: Fuchsia Malaise adds to the eldritch, gonzo, science-fantasy, post-apocalyptic campaign world of Cha’alt. It’s more of the same, but there are twists. Some time has passed. There aren’t lengthy chapters with meta-plot, but here and there in descriptions and bits of background information you can see the world is changing, evolving. There are, indeed, new PC races. I’ve also included GM material, several “dungeon” areas to explore, creatures, magic items, NPCs, random tables, the works! Additionally, the latest version of Crimson Dragon Slayer, Cha’alt Ascended, and Old School Renaissance Like A Fucking Boss will be included in the appendix.

Together, Cha’alt and Cha’alt: Fuchsia Malaise will provide you with more world building and ways to build that particular kind of world than you could ever use in a lifetime… until I release the third book in the trilogy, of course. Haha!

4 Responses to A Few Words With Venger Satanis